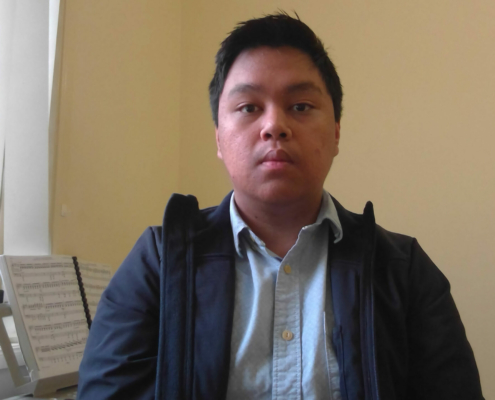 Listen to Andre’s original composition submitted with his entry.

Listen to Andre’s composition performed by the QYO Chamber Orchestra.

My name is Andre Fuller is a year 12 student studying at St Joseph’s College, Toowoomba. I began studying piano at the age of 14 doing mostly Western art music. As I progressed however, I shifted towards jazz and film music.

Throughout the first 2 years of doing music, I was predominantly a performer in school ensembles and as a soloist. I slowly discovered my affinity for composition when I was 15 after I began spending the last 10-15 minutes of my piano practice sessions doing improvisation, creating harmonies, melodies, and ostinatos, and continually building and layering them. I began to record these ideation sessions on piano and would orchestrate them for different ensembles. Although most of these compositions were jazz, I began to branch out into other styles.

Particular interests of mine have been gaming and film music. I enjoy the challenge of analysing gameplay/narrative elements within a game or film and creating a composition that complements and matches them.
As a budding composer and musician, this is the first competition that I have entered in and I am incredibly grateful for the opportunity to work with mentors and fellow composers to develop my musicianship, and for the opportunity to have one of my compositions recorded my the Queensland Youth Orchestra.

The inspiration for my piece mostly comes from game music. In particular, I wanted the fanfare to go through all 3 stages of a typical boss battle. The raucous, dissonant, introduction signals the entrance of a threat. The breakneck tempo of 200 crotchet beats per minute creates a frantic tension and drive, and a feeling of incoming danger. After this introduction, I perform a metric modulation and change each bar to 100 minim beats per minute. This abrupt shift signals the beginning of the fight, and here I introduce my first melodic theme. The relentless triplet rhythms played by the strings and the snare drum create a grandiose and militant atmosphere. For this section, I avoid strong cadences and instead use chromatic movements to shift into different tonal centres to keep the listener on edge. On the third iteration of the main theme (which began in G minor, and then restated in F minor), I shift away from a minor tonality to a major tonality. The battle is coming to a close. Slowly, I build tension, slowly entering every instrument in the orchestra. At this climactic moment, I finally use a V-I cadence. This marks the turning tides, and I finally shift to a major tonality. I end the piece with a grand flourish, shifting between the Ionian and the Lydian mode. Victory, at last.