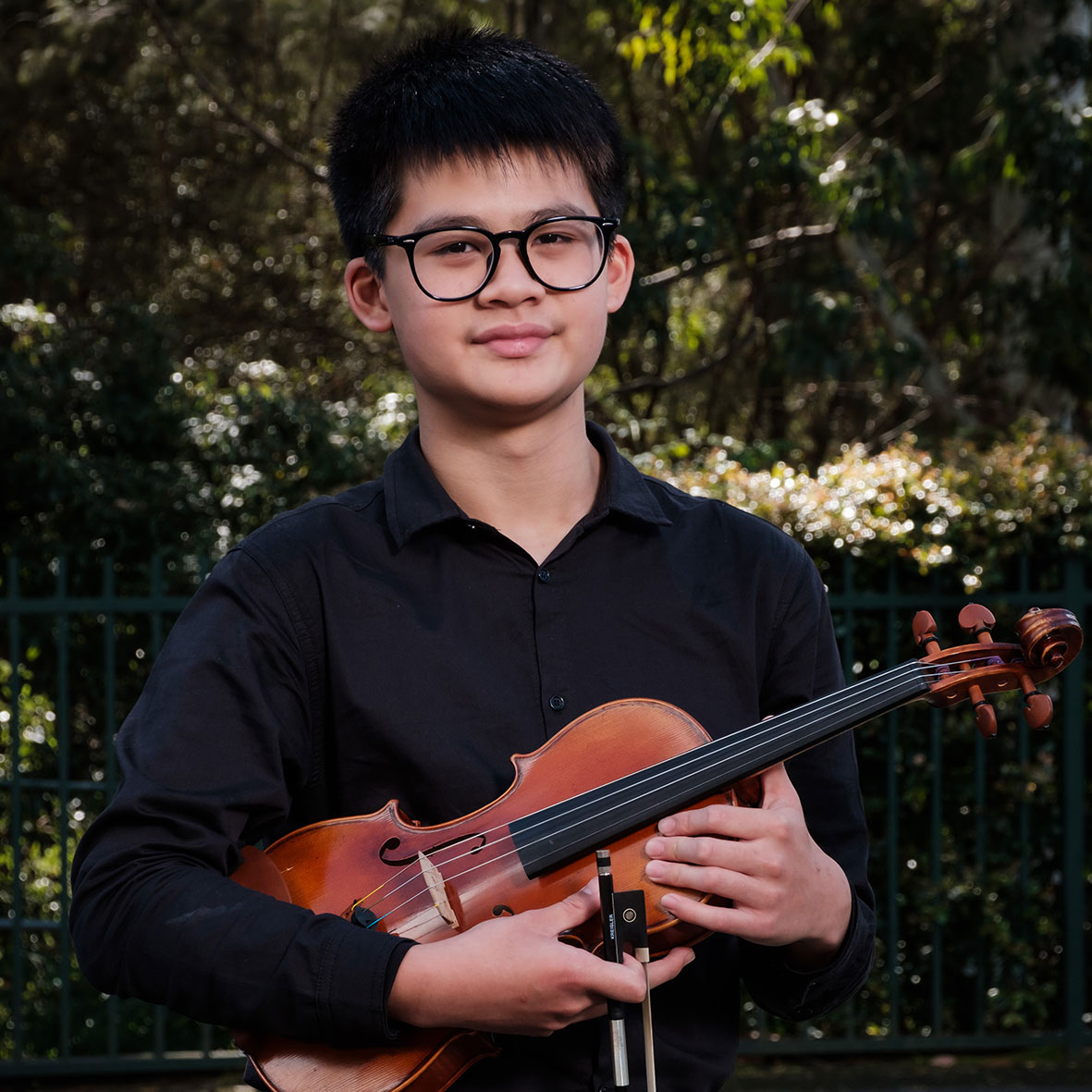 Listen to Andrew’s original composition submitted with his entry.

TO COUNTRY: Our Homeland

Andrew is a member of the SYO Richard Gill Chamber Orchestra under the baton of Ms Kate Morgan. At the age of 9, Andrew made his first professional debut as a violin soloist performing Vivaldi’s The Four Seasons 1st Movement. His distinguished talents as a composer and violinist were recognised at the age of 10 when he first performed his own composition, I. Cold and Windy, The Weather in the SYO Spring Showcase 2019.

In 2020, Andrew won the Founder and President Prize of the 5th International Composition Competition “Artistes en herbe” Luxembourg. He was the 1st Prize winner in Armidale Composition Eisteddfod in 2020 and 2021. In 2021, Andrew won the 1st Prize in the Junior Strings Championship, the 2nd Prize in the Junior Piano Championship and several prizes on violin and piano in Wollongong Eisteddfod. He was also a finalist in Artology’s Fanfare Competition 2021.

In 2022, Andrew was part of the ARCO Young Mannheim Symphonists 2022 NSW Intensive. His orchestral composition was featured in a radio broadcast in Europe as the overall winner of the UME Composition Competition 2022. He premiered his own string orchestral composition with Vov Dylan’s “The Palace Orchestra”, and performed on piano as the youngest finalist in the Finals Concert 2022 for the SMC Banksia Award for Young Composers and the SMC Youth Music Awards.

Andrew’s passion is to be a composer, a conductor, a performer, and a music educator as a testimony of his God-given talents.

This short work aims to acknowledge the country we respect, love and call home, Australia, with reference to its famous Aboriginal tradition, “Dreamtime”. It basically explains how life came to be, with the stories and beliefs behind creation and it is still constantly evolving in modern society today. Dreamtime attempts to illustrate and celebrate the wide diversity within Australia, as represented by its native animals, landscapes and culture.

The main themes of this piece reflect on different Australian animals. For instance, the theme that is developed and kept persistent throughout the entire piece is the triplet figure, which represents koalas’ exoticness and sleepy character. This is first introduced by the French horns. Another theme which utilises only two notes, A and E, is for the iconic kangaroo with many leaps and staccato in a rhythmic motif, illustrating kangaroos hopping. This motif is first played by the timpani. At the same time, the melody of the bassoon’s entry also symbolises the kangaroo. Some other melodies mimic other animals, such as the flute’s high-pitched melody, which can be associated with particular birds, like the rainbow lorikeet.

The use of A minor, which possesses a “dry” sound, reflects on Australia’s famous, unique, arid landscapes. In this piece, rhythm is more prominent compared to pitch and is what gives it life. The dynamics are also an integral part of the piece, namely, through the string section’s large crescendos spanning from pianissimo to fortissimo, which help to build intensity.

Initially only beginning with timpani, each individual instrument enters at different points and are often provided with melodies, usually in a soloistic style, which demonstrates the different tone colours and emphasises the wide variety of Australian culture and nature. For example, in the beginning, as the double basses and violoncellos enter, they imitate the sound of a didgeridoo, as well as the trills in the woodwinds, which are especially illustrative of Aboriginal culture and dreamtime. Simultaneously, the piece gradually increases in dynamic, building up to a dramatic ending to finish the work.