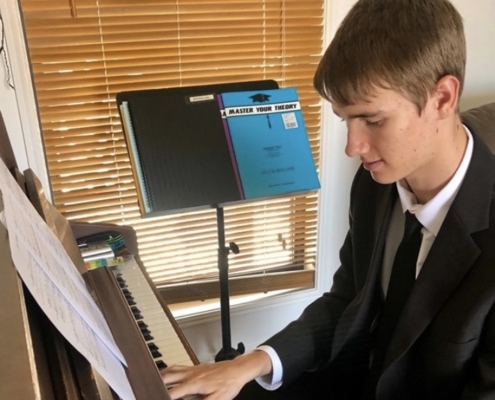 Composition: A call from space

Listen to Andrew’s original composition submitted with his entry.

Born in South Africa in 2003, I moved with my family to Australia in 2009. I am currently living in Queensland in a place called Bundaberg. Music has always been a part of my life. With both my parents being musicians, I received a violin for my 3rd birthday. I soon realised this wasn’t the instrument for me and took up cello at the age of nearly 8. A few years later I began percussion lesson as well. Singing has also been an integral part of my life and some of my earliest memories are singing with a microphone at home.

I am fortunate to attend a school which has a vibrant music department. This has given me many opportunities to explore my musical gifts. I started playing around with Garage Band when I had an Ipad, though it didn’t really interest me that much. In 2018, I was given a program called Notion by Presonus. I used this for my music assignment and started to find a passion in music composition. Since then I have been working on a variety of styles of composition and have accomplished more than I could have dreamed of.

I have found my passion in film scoring as I find this genre best suits my musical ideas. I entered my first international scoring competition in 2018 and composed for my first documentary film with some other local composers at age 15. Since then, I’ve gone on to win an ASME (Australian Society of Music Education) Senior Instrumental Composition Competition and made finals in my second ever international competition. I have many pieces performed locally and internationally. I’m now working on game music along with short films with my friends in which I’m hoping will release my music into the world. I am very excited about the future and hope to study film scoring once I leave school.

“A Call from Space” is a piece that was inspired by the works of John Williams, reflecting on the uncertainty of space, and what it can bring. Its purpose, bringing everyone in to witness the unknown. When composing it, I focused on creating something simple that pops out, as I believe the best way to connect to an audience is to allow them to forever remember the tune that is projected into their minds. This is also why I used trumpets and French horns in octaves, as I wanted to use these two brass instruments to achieve a melody that pops out.