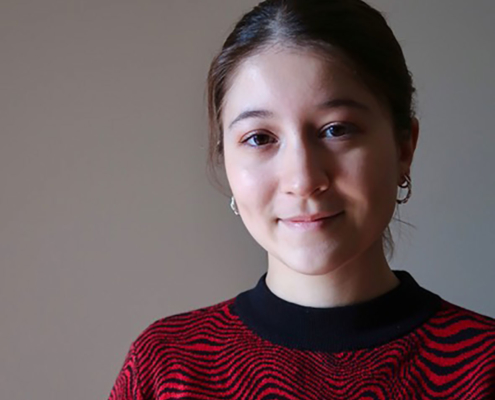 Listen to Ayda’s original fanfare she submitted with her entry.

I am Ayda Akbal and am currently studying a Bachelor of Arts and Bachelor of Music – specialising in Composition and Music Technology – at Monash University. I began my formal music education at the age of 6, through learning the piano, and picked up the cello and voice a few years later.

My love of composing grew as I transitioned to taking basic group composition lessons. Within the past few years, I have sought out those that inspire me and have learnt about composing and arranging for a variety of styles and live ensembles, including for Big Bands, Symphony Orchestras and advanced Choral Ensembles.

I have competed in and won various competitions, including the annual ACMF Songwriting Challenge, St Leonard’s College’s House Music Competition as best conductor and was a finalist in the 2017-18 Artology Fanfare Competition. My theme was also selected by the Royal Children’s Hospital, for use on their new ‘BioEthics’ Podcast.

Currently, I am focusing on learning and growing as a composer and arranger as I take masterclasses by established musicians and aim to develop and refine my voice and artistic intention. Additionally, I am working on a few personal and professional projects, including scoring for an upcoming audiobook overseas.

The idea behind my fanfare came from a few years ago when I was sitting in my babaanne’s (grandmother) living room in Turkey, which is nested in a high apartment block right next to a busy street. I was working on another piece when I heard the car horns outside overlapping and creating close-knit harmonies with one another, so I decided to pitch those notes and write them down to use in a future piece.

That future piece turned into this fanfare that I composed this year, as I gave those notes to the trumpet section in the orchestra and began to create with the idea of mimicking the chaotic and overlapping traffic sounds heard on everyday busy streets. Car horns are familiar sound that most people around the world hear daily and, in a fanfare, I believed that concept would suit as car horns are one of the sounds humans have evolved to listen to instinctively and fanfares are meant to be attention-grabbing in a similar way.