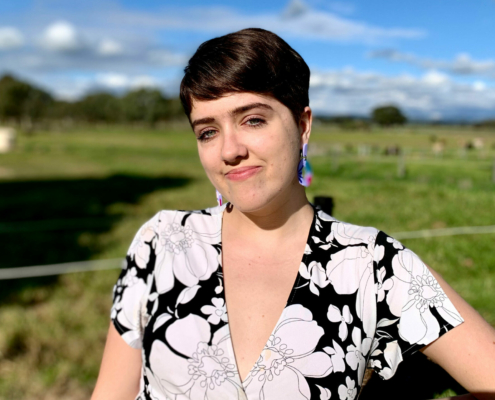 Listen to Bonnie’s original composition submitted with her entry.

My name is Bonnie Cook, I am 20 years old, undergoing a Bachelor of Music (major in Contemporary music, minor in Composition for Creative Industries) at the Sydney Conservatorium of Music, and am originally from a small town in Western Australia.

I initially began learning music from my parents at a young age, who were both rock and soul musicians, particularly my Dad, a renowned 80s Perth drummer who taught me to play drums. I would go on to learn flute, tenor saxophone, piano and vocals in high-school, ranging in genres from Western art repertoire, jazz, rock, pop, etc.

Throughout high-school, I was fortunate to perform in yearly concert and jazz bands as lead flautist, and eventually lead tenor saxophonist, winning the South-West’s 2017 ‘Queen’s Cup’ jazz band competition.

I graduated high school with the top Music ATAR award, being so very fortunate enough to receive a place at the Sydney Conservatorium of Music, beginning my tertiary studies in music. I was also lucky to receive the opportunity to teach short-term at JD’s Music Tuition (Bunbury) as a multi-instrumentalist teacher, which was such a fun and rewarding experience.

My aspiration is to continue studying composition, hoping to kick-start a career as a popular music song-writer/producer or tv and film composer, combining my growing instrumental and composition skills to explore many genres and pathways. Music has been with me through many stages of my life, and I’m so looking forward to what will come in the future (beginning with the Artology Fanfare competition!).

This composition, named ‘Everlasting’, was inspired by the fanfare and cinematic works of superhero, sci-fi and blockbuster films (EG: Marvel Cinematic Universe fanfare by Michael Giacchino). In works such as these, we can see big brass movements, intense string ostinati, and huge triumphant swells.

I have tried to emulate this idea by working around a minor triad, staccato violin ostinato, suggesting suspense, to which I bring in a heroic brass motif to compliment. The orchestra shortly joins together to perform the brass motif against the string ostinato, as well as lower strings and select brass playing syncopated staccato jabs, creating tension towards the big tutti resolve. I tinkered with triplet rhythms in the finale to create a sudden and dramatic climb into an unresolved chord, that immediately proceeds back into the solo violin ostinato. I found that many blockbuster fanfares use dramatic shifts in orchestration and melody, as if symbolising an action-packed filmic scene.

The overall sound is intended to be strong and forthcoming, as well as heroic and daring. Above all, I am a sci-fi fan, and so was my Dad, so this piece was written in honour of him.