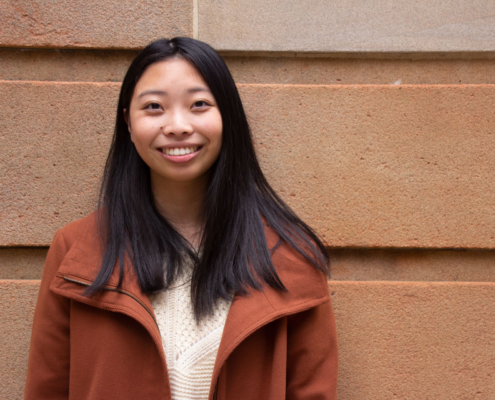 Listen to Gallya’s original composition submitted with her entry.

Gallya Hazali began her musical journey from the age of 6 learning the piano. This lead to various opportunities such as performing throughout high school as a soloist and in ensembles. It was through school music assignments that her interest of composition was stimulated, writing her first work at the age of 14 independently leading to an occasional hobby. She began to seriously cultivate her skills when she entered University where she currently studies Composing for Creative Industries at the Sydney Conservatorium of music. This has led to her current journey writing for a variety of mediums including concert works, Film/TV and experimental works. Gallya’s musical interests and inspirations come range from a variety of sources such as romantic and early 20th composers including Chopin, Debussy and Ottorio Respighi, jazz, contemporary film scores and non-western musical influences. She continues to share and inspire her musical passion to others as a piano teacher.

My fanfare was created within a very short time frame during a period where I felt mentally exhausted and needed some form of relief. I had a musical idea from a while back in which I thought would be suitable for this particular work. The inspiration behind ‘Arise’ was conceived through experiences of optimistic breakthroughs and hopefulness that had stemmed from difficult periods in my life. It is also a reflection of how my composition processes normally occur. As exemplified in the music’s trajectory our highest achievements often evolve from the smallest of ideas, though they initially seem daunting, challenging and convoluted, these fragments slowly begin to make their own sense as we continue to work on them, gaining momentum, control and eventually flourish from struggles to successes. I attempted to emulate these ideas mainly through orchestration and harmonic arrangements. My Intention was to develop motivic material and embellishments that could integrate with each other but also standout individually. We hear a delicate theme in the glockenspiel at the start of the piece, followed by the marimba, then a response in the horns, woodwinds and a sequence in the strings, as the material grows into the pivotal climax of the fanfare.