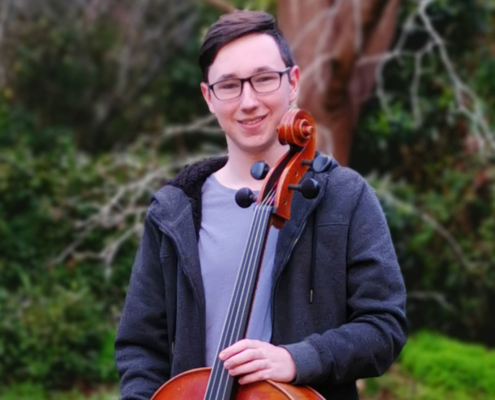 Listen to Hayden’s original composition submitted with his entry.

I come from a musical family with my mum, a pianist and violinist, and my dad, who played in various rock bands. I began learning piano at age 5 (learning in a jazz style, before switching to classical) and by age 8 was also learning cello.

I grew up constantly listening to music, from my mum’s beloved Mozart and Bach, to my dad’s indie and alternative rock, folk and blues every year at the Port Fairy Folk Festival, jazz from my former piano teacher, and the great romantics Beethoven, Saint-Saëns, and Tchaikovsky from orchestral programs. This led to my love of music, and later to exploring my own tastes. Right now you can catch me listening to all sorts of classical music, especially 20th century orchestral works, and jazz fusion.

As a musician I love playing both chamber and orchestral music. I particularly love the orchestra because it allows composers to express unique ideas through exploration of a wide range of instruments.

Although I wrote a few pieces early on, my main interest in music composition started last year, having written several solo, chamber, and orchestral works. I love expressing my own ideas and exploring textures and soundscapes through orchestration.

I am very excited to partake in the 2020 Open Fanfare competition and would like to thank Artology for allowing me to.

For my piece “20th Century Blast” I was inspired by two of the 20th Centuries biggest innovators in harmony, Igor Stravinsky and Olivier Messiaen.

Stravinsky’s use of polychords in his early works such as Petrushka and Le Sacre du printemps inspired my own use of chords in the work. I was influenced by Stravinsky’s use of one stagnant and one moving chord (such as the opening to the Danse Russe from Petrushka) which inspired the opening choral. I also took inspiration from Stravinsky’s intense rhythmic energy, which is especially seen in works such as the Symphony in Three Movements and Agon. This energy adds excitement and drama to the music.

French composer Olivier Messiaen discovered a unique set of seven scales which cannot be transposed into every key, he called these the “Modes of Limited Transposition”. Messiaen used all of them extensively, particularly in works such as the Turangalîla-Symphonie. The modes create a unique sound as they are not tied to any key, and thus can be used to create unique orchestral textures. In my piece I used both the 1st mode (the whole-tone scale) and the 6th mode.

I decided to name my piece after these two 20th century innovators and the effect they have had on my own compositional style.