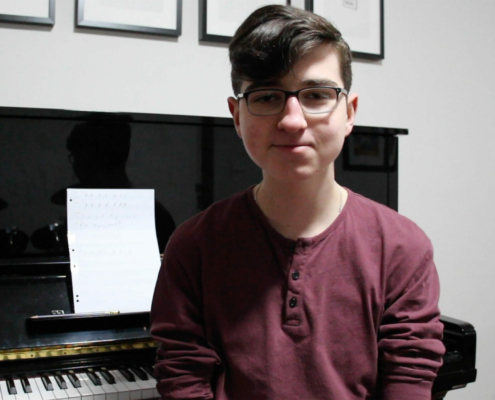 Listen to Heath’s original composition submitted with his entry.

Heath is a Year 11 student at Bradfield Senior College where his favourite subjects are Music, Musical Theatre and Screen & Media. He started music tuition at age 4 and has completed AMEB Grade 8 piano. He is mainly a vocalist and pianist, also playing guitar, bass, drums, clarinet and saxophone on the side. Although his training is in classical music, he is interested in a broad range of music styles, particularly jazz.

Heath was a member of the original Australian cast of School of Rock: the Musical and has performed in Turandot and Parsifal with Opera Australia, as well as community theatre musicals and school productions.

Heath has composed music for Sport for Jove Theatre Company’s youth programs, as well as composing, arranging and designing sound for school drama productions, dance studio concerts, eisteddfods and several student film projects he has been involved in.

After school, Heath hopes to study music, perhaps with sound design or filmmaking.

The fanfare you’re hearing is the second version of this piece that I wrote. The original version of my fanfare resembled light music, a style of orchestral music that became popular as background music for radio broadcasts in the 1950s. I discovered light music through my interest in jazz, as light music was greatly inspired by big band jazz, with the close-voiced sax soli phrases of big bands translating to similar phrases in the string section in light music. I decided to compose in this style as I felt that it might make my fanfare stand out from fanfares written in a more classical style. Upon completing the first version of my fanfare, I decided it wasn’t flashy and attention-grabbing enough for its purpose as a fanfare, so I rewrote most of it with a new approach, with only a couple of short phrases of the original melody remaining. This time, I aimed for more of a classic Broadway musical overture feel, something that I’d never really tried in any of my music before. I treated it as a challenge, doing things like using harmonic devices I hadn’t used before. I wrote a new, showy opening, but was able to keep the lyrical string harmonies of my original version in the second half, this time acting perhaps as the contrasting love theme in the overture. I’m glad I decided to rewrite my fanfare, as the piece that it became is something that I’m much happier with.