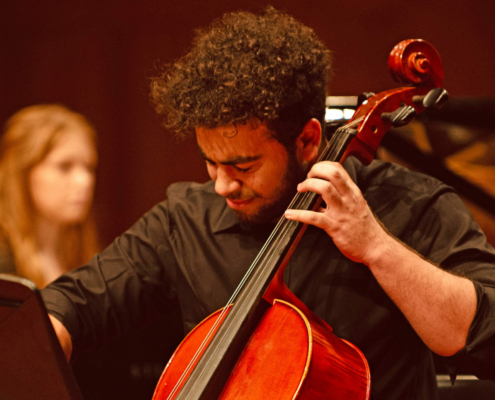 Listen to Jonah’s original composition submitted with his entry.

From a young age, I have always loved music. Playing piano from as young as three years old and picking up multiple instruments along the way I have always been fascinated by it. In particular, I always naturally gravitated to performance, however nervous I may be for every performance. I always aimed to have a certain charisma and energy in front of audiences – I always wanted to make each performance memorable, not because of how well I could play my repertoire (although that of course is a maybe), but I always wanted to convey a range of strong emotions and character through whatever I played.

Towards the end of my schooling, I decided to give composing a go, despite having been a performer my entire life up to that point. I found an interest and a growing love for it – my passion for engaging my audiences and portraying a certain a mood and atmosphere I decided to express from the very roots of music, the making of it. I have been composing for just over a year, having done it for Music 2 and Music Extension in HSC last year and now at The Conservatorium majoring in Composition for Creative Industries. Who knows what’s next?

While I love music, I also love watching movies. If you were to ask me if I’ve seen some classics, the answer will most likely be no. However, that doesn’t hinder my appreciation for all the music from these films – the amount of soundtrack introductions or movie company titles I’ve listened to – if I had a dollar for every single one that I’ve heard, I wouldn’t need to work a day in my life. With that being said, my inspiration came from these. I didn’t necessarily go back and listen to these fanfares or introductions for my own fanfare ‘Shimmer’.

The way I went about it is I identified the elements that made the iconic fanfares a fanfare, implementing that within my own. For an example, heavy brass that move predominantly in 4ths and 5ths across its melodic contour. In terms of other elements of the fanfare such as the flute and clarinet parts and the strings towards the end with a descending shimmer, I like to think this draws resemblances to the golden age of film with its emphasised orchestral features, particularly in John William, or as more modern examples Hans Zimmer and John Powell. I study listening to their soundtracks, so in terms of inspiration I essentially drew from the emotions I felt while studying.