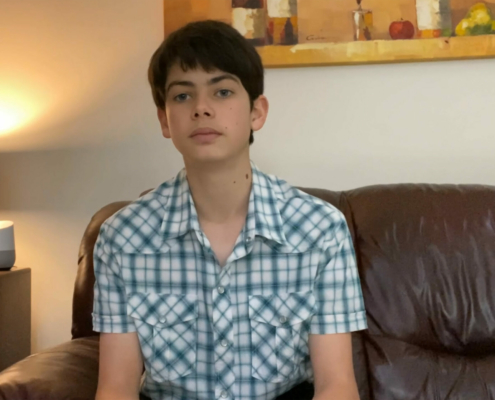 Listen to Jonathan’s original composition submitted with his entry.

Listen to Jonathan’s composition performed by the QYO Chamber Orchestra.

My name is Jonathan Platz.  I am 13 years old and in Year 8 at Atherton State High School.  My interest in music began in 2017 when my parents signed me up for clarinet lessons with the school’s instrumental music program.  In the same year, I took on private lessons in singing.  The following year, at age 10, I began learning the piano.  This was also the year I discovered my passion for composing.  With the encouragement of my music teacher, I entered competitions for young composers. In 2019, my clarinet quartet received two awards and first place in the Open Junior section of the Gold Coast QMTA Composers’ Competition.  In 2019 and 2020, I was awarded second place in the Instrumental section of the ASME Queensland Young Composers’ Competition. To cap off the year, my string quartet The Pursued made it to the quarterfinals in the 2020 Classic Pure Vienna International Composition Competition, receiving a ‘Promising Young Composers’ Award.  This piece has since been performed by the North Queensland Chamber Orchestra’s string quartet in Atherton and Cairns.  In June, I received two awards and third place in the Open Junior section of the Gold Coast QMTA Composers’ Competition.

I’ve won various awards at Eisteddfods and I currently play first clarinet in my school’s senior concert band.  For the past four years I have attended the North Queensland State Honours Ensemble Program (SHEP) and I am currently working towards my Grade 6 AMEB clarinet and piano exams.

A proclamation is “a public or official announcement dealing with a matter of great importance.”  This definition encapsulates the inspiration of my fanfare. To represent the idea of someone making an important announcement, I decided to begin with a dramatic opening where the whole orchestra plays a sudden fortissimo unison on A. This is followed by the French horns and trumpets playing a bold, ‘call’ like rhythm. A chromatic motif is then performed by the strings, leading to the first quick outburst, consisting of rising demisemiquavers in the flutes and violins, a triplet semiquaver pattern in the oboes and clarinets, and a rhythmic variation of the ‘call’ theme, again by the French horns and trumpets. A new theme is introduced which provides a brief and more tempered moment before the ‘call’ motif returns. This leads to the dramatic finish; a sudden unison D played in fortisisisimo.

Before writing Proclamation, I had composed another fanfare titled Firestorm; a piece incorporating the didgeridoo.  Inspired by the works of Sean O’Boyle and William Barton’s Didgeridoo Concerto and Peter Sculthorpe’s Earth Cry, I set out to create a fanfare that sounded uniquely Australian. I didn’t end up submitting this piece, as I was unable to get a suitable recording of the didgeridoo.  However, I do plan on completing this fanfare when I have the chance.