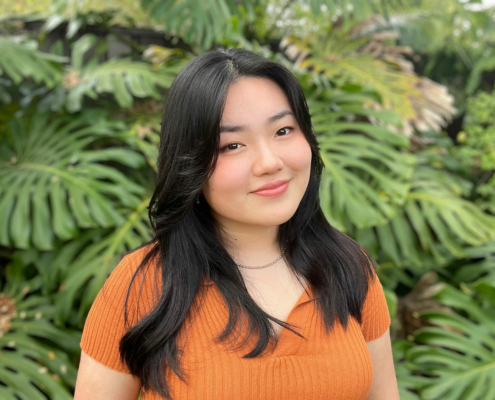 Listen to Sujin’s original composition submitted with her entry.

Composition: Sunrise over the wide plains

Sujin Kang is an 18 year old aspiring composer currently studying Composition in Creative Industries at the Sydney Conservatorium. Starting music from a young age learning the piano at the age of six, she found her love for music when she joined the School Band in Year 4 playing percussion. Continuing to play percussion in her high school band, Sujin also completed Music 2 and Music Extension in the HSC, further fuelling her love for music.

Sujin began to take interest in composing in 2019, after finding her footing and composition style and further continued to experiment in multiple styles, not only school assignments but for her own enjoyment too. Sujin enjoys film and video game music and one day hopes to compose for these mediums, while also continuing to compose for herself too.

Sunrise Over The Wide Plains was initially created through some piano improvisation to create the introduction and I spread this motif through the orchestra, grouping them by the range of each instrument. I was inspired melody wise by various wind band pieces I have played from my high school band and my community local band such as, The Seventh Night of July by Itaru Sakai, Seagate Overture by James Swearington and The Dambusters March by Eric Coates that highlight the brass, woodwind and percussion section. My keen interest in film scores and its ability to draw visual and audio elements to create an emotive piece inspired my piece to describe a scene from a film, an opening to a character or landscape through the style of a fanfare. I imagine this musical work to be played as an introduction theme song to an adventure movie/show perhaps based around military themes or discovering a new land.