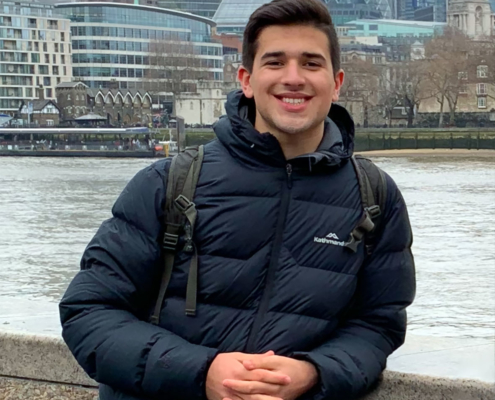 Composition: Fanfare for the Frontier

Listen to Thomas’s original composition submitted with his entry.

My name is Thomas Fernando. I’m seventeen years old, completing my final year of high school at St. Kevin’s College in Melbourne. I have studied classical Piano and Cello, been involved in multiple school ensembles, and I am a self-taught drummer, however my main interest is in composing. It has been a life-long ambition to pursue a career in scoring films, television, and theatre. Growing up, I listened to a wide variety of music – ranging from Queen and The Beatles, to John Williams and Bernard Herman.

My love of film and music collided for the first time, when I wrote my first ever score for a film that I was working on with my friends in year six. While working on this film, I discovered that I found the most enjoyment in the process of composing – so much so that I wrote substantially more music than was needed for the film which never eventuated. While I had written an orchestral score, I had never considered how I’d actually record this music – I didn’t have an orchestra at my disposal!

This led to me to discover musical technology such as sampling, MIDI programming, and sound synthesis, which has allowed me to pursue a wide variety of musical textures, instruments and timbres from the comfort of my bedroom studio and my laptop. I am just as interested in the evolving technology of music as I am in the theory behind composition.

I’ve written music for a variety of projects – ranging from bombastic big band spy music, atmospheric synth-dominated sci-fi scores, and rich orchestral adventure themes. My music has been awarded in competitions such as the ACMF National Songwriting Competition, and has been performed by ensembles at my school. I am incredibly grateful for the opportunity provided by Artology to have my original composition, Fanfare for the Frontier, performed by the Australian Youth Orchestra.

My aim of my piece, Fanfare for the Frontier, was to evoke a sense adventure and discovery, the exploration new uncharted territories. Personally, I linked this theme to my love of science fiction film music, which informed many of my creative decisions in writing this piece.

Over the past forty years, John Williams’ film music has defined the musical landscape of science fiction. His scores for Star Wars, Close Encounters of the Third Kind and E.T. The Extra-Terrestrial convey a sense of adventure, wonder and awe, which I wanted to capture in my short fanfare. Much like how Williams’ film scores are incredibly evocative and moving, and I wanted my short fanfare to evoke a sense of exploration, triumph and joy.

Another notable film composer, Jerry Goldsmith is remembered for his scores to Star Trek: the Motion Picture and many of its sequels. Goldsmith’s melodies have an anthemic quality which make them incredibly uplifting, and I wanted the melody of my fanfare to conjure this same feeling in the listener. The large intervallic leaps in my melody, inspired by Goldsmith’s writing, are intended to signify the leaps and bounds of a daring adventure.

While my piece is written for an orchestral setting, eighties synth pop played a role in shaping the harmony and rhythm of my piece. Music from that period still has an incredibly futuristic and otherworldly quality, which I reflected through my use of an eighties synth pop style chord progression using complex suspended chords and a syncopated bass line. In addition to this, I wrote a short melodic hook, which is introduced first by the brass, before being repeated by the strings and winds throughout the piece as an ostinato which compliments the melody.