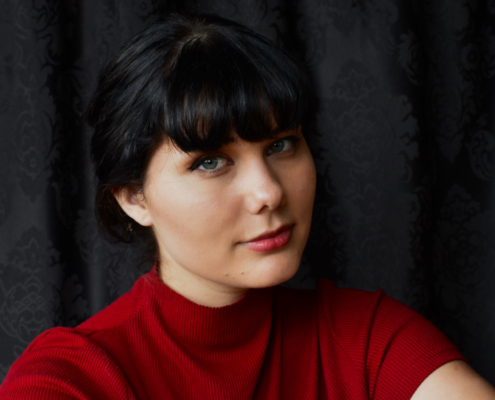 Composition: Fanfare of the elder one

Listen to Francesca’s original composition submitted with her entry.

Francesca Brzoskowski is a 19-year-old emerging composer, creative and sound designer from Brisbane. Studying classical piano from a very early age, Francesca developed a passion for music and composing, playing well received piano compositions at eisteddfods and competitions across Brisbane. Combined with her background in theatre, choral and vocal training, Francesca is an elective composer, characterising her music with experimentalism in colour and textures. She composers traditionally for orchestra, string ensembles, jazz ensembles and choral ensembles. Her interest in electronic music and technology allows her to create unique soundscapes and compositions for video games, film-and-screen, animation, and theatre. Francesca is currently composing and sound designing for Vena Cava theatre’s production of Talking to Brick Walls by Claire Christian. Her composing style pays homage to early 20th century impressionism music fusing it with modern film music and experimentalism. In 2019, she showcased Last Morning at a Brisbane concert, a spoken word piece where a recording of a human voice is replicated through string instruments and melodies. This, along with her debut single Sigh was performed by Topology, whom she won the 2019 Topology Composing Scholarship. Under the mentorship of Queensland Music Ensemble, Topology and Isabella Gerometta, Francesca’s upcoming works include an ethereal sounding piece for choral and a collection of sound-photography pieces titled Ocean Sound.

When composing the theatrical Fanfare of the Elder One, I wanted the piece to be theatrical, dramatic and flamboyant. I can hear it being played in an opera while the grand antagonist makes a colossal entrance on stage, the audience is in awe. I was inspired by the anticipating rhythms in horror works such Gassed by Bobby Krlic and texture in Pas de Deux by Micheal Abels. Additionally, I wanted to carefully take the human hearing in consideration. I expected that an audience would be conversing before hearing the fanfare as a signal for a performance to start. The average conversations are around 60bB, the average vocal talking range in pitch is between 82.41 Hz (E2) and 262 Hz (C4). I designed the beginning and the final sections of my piece in full concert loudness and for the majority of instruments to either play above 262Hz or allow the harmonic overtones from lower octaves to ring in that area. This guided a lot of my harmonies and melodies. I kept the melodies talkative among instruments in quiet sections to mimic excitement and anticipation, while the main melody in the brass section is loud, fierce and strong. The meter is interchanging between 7/8 and 4/4 which gave the piece the flamboyant syncopation and attention seeking nature I am after. To achieve this, I never let a section repeat more than twice before erupting into something new getting more extravagant by the second, similar to a grand theatrical production.