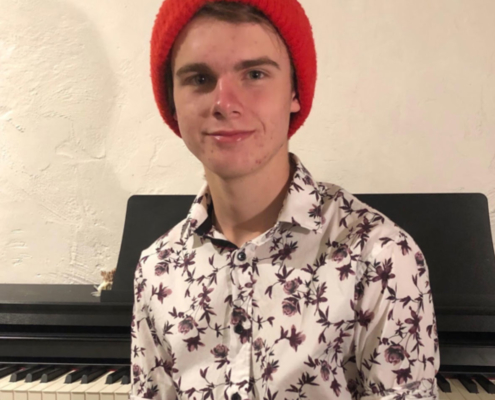 Listen to George’s original composition submitted with his entry.

I started music unofficially as a 3 year old child playing my smash hit Eagles cover on the ukulele – ‘Hotel Caffoffonya’. After this stumbling, open-string smacking early childhood, I managed to get piano lessons at 7 and since then I’ve been a bit more musically sane. I started trombone for school when I was 9, and couldn’t decide whether I preferred being alone at the piano or mucking around together in a band; I loved both! So, lucky for me, composing kind of merges these two worlds: Sitting at the piano as one brain writing stuff for many more brains to enjoy together seems like the ultimate musical experience to me. In high school, I got into jazz and started messing around in a sextet, where we could really get experimental and push some of the limits that I thought were steadfast rules. I didn’t forget the magic of classical during this time, though! I attended the SSO’s Playerlink workshops every year, getting to play the most magical romantic music, and have always been infatuated by film music as well (who isn’t?). A year ago I picked up my favourite instrument, the mandolin, and we’ve been inseparable since.

My fanfare, The Overground Underture, is focused around the idea of things establishing a pattern, then surprising you by jumping in before you expect them – things getting closer together in that sense. The start takes a quaver value off of each bar, surprising an unwary listener, and each time adding to the cluster chord until it explodes out into the open space for the bulk of the fanfare. The main motif is very small (two semiquavers and a lower quaver), because I knew I only had 30 seconds and wanted to pen an idea that can be reused over and over again within that time. It’s now fun looking back and counting the number of times the theme pops up throughout. It’s inspired by 20th century romanticism and operatic film music – John Williams and John Powell inspired the many trumpet tupleted lines, Britten’s Turn of The Screw Act One Theme had a big influence on the idea of accenting different notes in a solo with hits from the whole band, and I drew some of the rhythmic and textural ideas from more modern composers. Of course, the hardest work for the piece was trying to think of an okay play on words for the title.