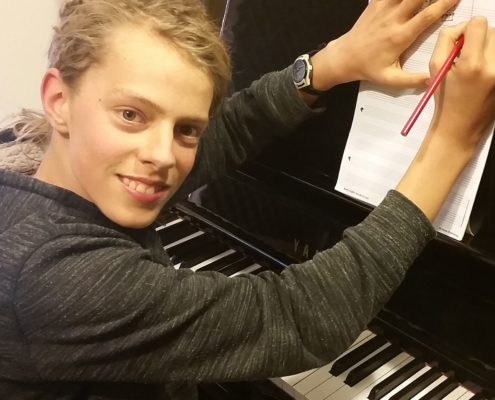 Listen to William’s original composition submitted with his entry.

William Dooley began composing his first pieces at age 6. By age 8 he had already composed his first piano sonata and has continued to compose for a number of different ensembles. His first full length symphony was performed by a small ensemble of Canberra Symphony Orchestra players in 2017, led by renowned violinist Barbara Jane Gilby.

In 2019 he completed a 2nd symphony which was performed by the Forrest National Chamber Orchestra that year, as well as a full length string quartet and an oratorio for choir, soloists and ensemble. He has written numerous shorter works for piano. He has achieved 4th grade AMEB as a pianist, and is currently preparing for his 5th grade piano exam. William plays in Peg Mantle Strings of the Music for Canberra string program, who have played several of his original compositions in their concerts, and are currently learning his latest work for string orchestra.

He has had a great love for music of the classical period, and in his composition he has explored traditional forms, forming a solid technical and musical basis, and is now looking to find his own original voice as he matures as a composer.

In 2019, when I first heard about the Artology fanfare competition,  I was very interested In being part of it, so I wrote a fanfare and submitted it  to the competition. When the winners were announced, I was a little disappointed to find that my name was not on the list, because at that point, I thought that my fanfare was the best fanfare in the world.  Soon after that, I attended a meeting – which was a compensation for those who did not win-in which the art of writing fanfares was discussed, and I got some good, knowledgeable feedback from Nicholas Vines, who was leading the meeting. It wasn’t until then that I began to fully comprehend how to properly write fanfares. Several weeks after the meeting , a little tune popped into my head, so I wrote it down. This was later to become the theme for m y fanfare.

I wanted to create a sense of excitement by changing quickly between different keys, and by having different instruments play different parts of the theme. I thought that the title “Awakening” would best suit the lively tune first played by the trumpets and horns in the opening bars.